Se7en’s Blog: When Your Goal is the Two Oceans Half Marathon 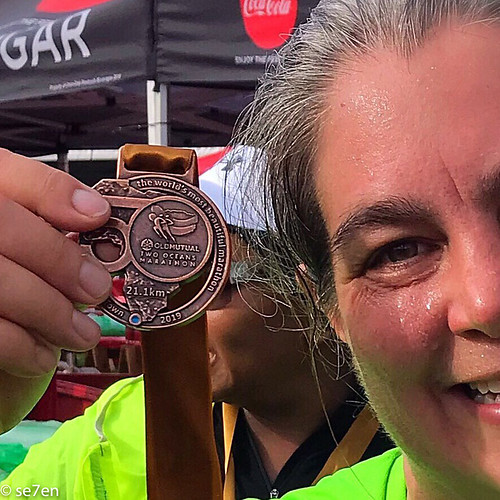 I dreamed, I trained and I conquered… I did it, I can’t even believe it. My goal was to finish and I finished. I felt as it got closer and closer to race day the pressure building to run like a super athlete… but to be honest… look where I have come from, I am one of thousands of back of the pack runners, who two years ago could not run even once around a track. The goal “to finish” was just enough. I am not going to lie, it was tough… I didn’t breeze through, I didn’t get up at dawn and suddenly run faster than ever in my life before. In fact, I think with race days nerves, my legs felt like lead. That being said, it was ABSOLUTELY the race of a lifetime, with roaring crowds and thousands of folk making their way to the finish line. And I finished… I made the cut-off with literally a handful of minutes to spare. Fair and square, I earned the t-shirt… and I was part of the Fiftieth Two Oceans Marathon Celebrations. It was a big deal, all of it… and I loved it.

What Was the Hardest Part

Three things worried me from the start: I had fallen hard during training a week and a bit before the race and after hours under ice, my leg was still black and blue; The hills, which are actually mountains, even though I had practiced them a lot in training, still seemed daunting. Southern Cross Drive is not a walk in the park; and lastly, the cut-off time. Slow runners, like myself, have to be worried about the cut-off… the fact is you can run slowly, and steadily and get to the finish timeously. But slow runners can’t stop and chat to their friends along the way, there is no time for a little emergency… you have to just keep on plodding.

And I did have a little emergency, I completely ran out of steam at Cecelia Forest, not just steam but nerve… it’s a gutsy thing to sign up for the Two Oceans Half marathon, when you don’t really believe you can do it and you have only dreamed about it. On paper, I had every advantage… all the training in the bag, I had a runner that had run every single step of the way with me, right beside me… and yet, my head started to say, “You can’t possibly be doing this.” Next thing I knew I had stopped… and everyone always says that one mustn’t stop, just keep moving forwards. Well I stopped completely. I had to regroup, a friend in the right place at the right time helped with some jelly babies. After that I knew I had wasted time, and I really had to up my plodding along speed and get to the finish. This race was a dream and I couldn’t quit, I just had to dig deep. I had to talk myself back into it, and I had to keep going. 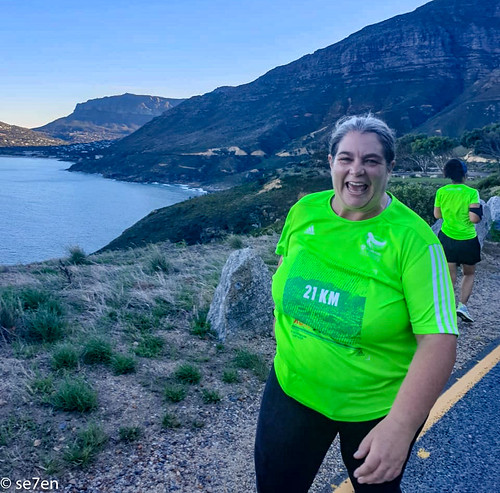 A Sweet Victory and High Fives

Firstly I survived the training, I loved it, in fact. When I saw the schedule I just about gave up on the spot… but no one does all the training in a day… and with one step at a time I managed to get through it. Apart from that I ran a half-marathon, and one of Cape Town’s toughest half marathons… (possibly because of the mountains you have to run up). I have gained running confidence, I think of myself as a runner now. I used to think, because I was slow that I wasn’t really a runner… but the truth is: running is running. And I do get there eventually. I have discovered the joy of sleep… I know I am always on about sleep. But seriously, it took two years for me to get from 2/3 hours to seven hours of sleep a night, but with all the running, there has been loads of it, and I am into the eight hours a night category. Every single night. And yes, I was getting up at 4:30 in the morning to get to training on time… and yes I was in bed by 8pm at the latest. Yes, I do go to bed way before my kids, every single night… because a mom must do what a mom must do. 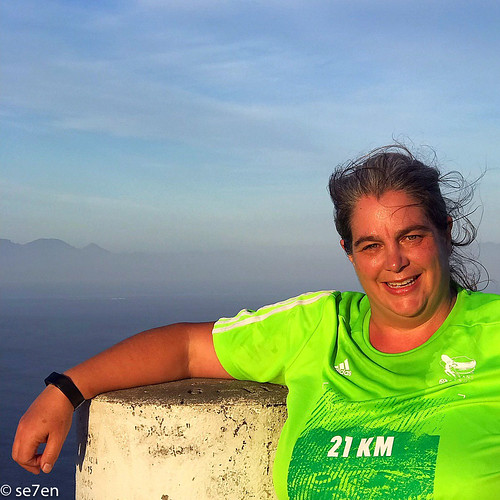 And What About Gym?

I didn’t realise that recovery would be so tough. I wasn’t stiff, so much as tired… very, very tired. The first week after the race I did one or two slow runs and felt like my running career was over. Other than that I slept and slept and slept. But now I am back at gym, back in the pool swimming laps and back in my regular Intermediate Healthy Weight gym class. I thought I would have lost all that fitness because running and gym class are two very different types of exercise… but I have been surprisingly fine. And as I get back into it, I can see myself looking for new challenges. 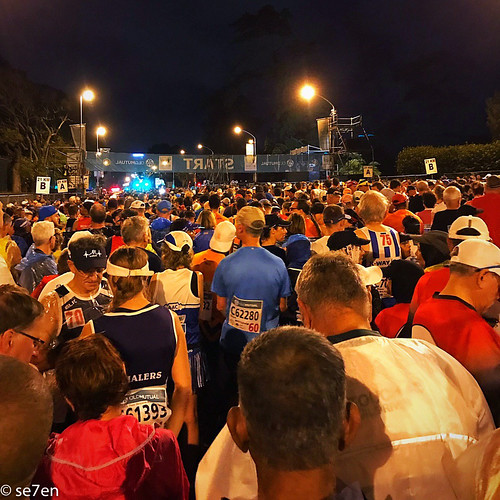 But What About You?

If you are sitting on the couch, thinking, “If she could do it then I could do it,” then you are so right. Seriously, if I can do this, anyone can. I would not have been able to do it without the total and committed support of the SSISA Team behind me. When I began the Healthy Weight Programme in the Beginner Class, all I managed was to get from completely sedentary to walking around the 140m track… months of the Intermediate Programme and Parkruns with my kids on Saturdays got me to the point of run/walking my way around a 5km route. I have to say that often we sit in our gym class and think we can’t do more than that. I would like to suggest that the Intermediate Programme is a stepping stone to any athletic endeavour that you want to do. Yes, you can maintain where you are at, but you don’t have to be able to do every single thing in the class before you dream bigger and just go for it. You may well be pleasantly surprised.

What Makes the SSISA Programme So Special

The most important factor for me, as a back of the pack runner, was the fear of being left behind. The training runs for a half marathon have to get longer, the nature of the race is that you will be running in the dark. I had visions of super fast athletes, scattering off into the dark… and me staggering along on my own before dawn. The fact is far from that, every runner on the programme, if they were fast or slow, had a trainer, or pacer running with them the whole way. You never run alone, you are never forced to run faster than you can just to keep up, and the joy of it all is that as you run, so the more experienced runner that you run with, teaches you and encourages you. All the exercises and runs catered for every level of runner… from the slowest of the slow, to the speediest gazelles. Apart from that, I really enjoyed the strength training sessions, once a week we did strength training and all sorts of funny little exercises… standing on one leg for example. I have become a proficient flamingo!!! I can really say that towards the end of a run, when survival kicks in and all running form falls apart, the strength training really made a difference to me and taught me to keep going, to hold on, for just a little bit longer, and then even a little longer. 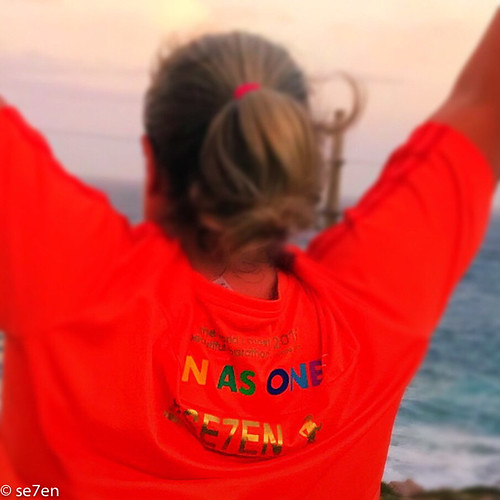 Would I Do It Again…

You had better believe it… a year ago my goal was to run 5km, and then I reached it… I still can’t really get over that I ran a 21km. What I have learned is that exercise goals are not endpoints, they are merely stops on the journey. It is time to refresh and rethink and ponder my next goal. In the meantime, now that I have recovered from my race… I realise that I am so much more able… this wasn’t really about running a half marathon on the day, so much as I thought it was. Actually, it was a lot more about saying to my kids: let’s run up the mountain together FOR FUN and mean it, or when a friend says let’s find a half marathon to run together, that I can say, “YES,” and confidently know that I won’t have a problem with it. I have the skills, I have fitness… and I am good to go, “onwards and upwards!!!”

You Can Read About My Journey From the Start…

In celebration of their 20th birthday, the Community Health Intervention Programmes (CHIPs) of the Sports Science Institute of SA (SSISA) is...

DROWSY DRIVING: THIS IS WHAT YOU MUST KNOW

It is estimated that more vehicle crashes happen due to drowsy driving than due to driving under influence of alcohol. In fact, sleep deprivation...

MELATONIN: A MEANS TO REDUCE RISK FOR HEART DISEASE?

HEALTHY EATING WITH A TIGHT BUDGET!

With our South African currency being awarded the unenviable title of “junk status”, inflation rates ever increasing, along with the threat of...